Are you a pushover for wine labels featuring animal art? I am — especially when loyal dogs and graceful horses are pictured. I don’t go much for bear, cat, fish, cow, bull and bird labels. Recently, however, I bought a Tuscan rosé with a Rhinocerous on the bottle.

They say marketing is everything, and I’d wager a bet that if a menagerie of wine bottles was stacked side by side on a store shelf, the dog labels would be the most popular sellers. What do you think? Send me your best animal wine label recommendations (jcampanini@lowellsun.com). Include a photo and a brief description of what you think about the wine. Here are two of my recommendations.

• Mulderbosch Faithful Hound Red 2013, $25 — One look at the label of this Bordeaux-style blend from South Africa and I had to bite. The hound appears to have found what he’s looking for, head up and alert, ready for his master’s reward. Turns out the wine is incredibly good, too — a real surprise on a night when the Wine Goddess grilled slices of tender beef sirloin, chicken and portabello mushrooms. It’s fruity, mouth filling, and boasts of big blackberry tastes from Cabernet Sauvignon, Cabernet Franc, Merlot, Malbec and Petit Verdot. Undertones of chocolate, coffee and peppery spices add to the enjoyment. It felt warm and creamy on the palate, a smooth ride to a lingering finish. 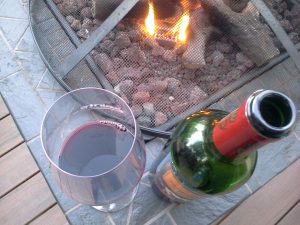 South African wines like this one deserve more U.S. consumer attention. Mulderbosch Winery is located in a top growing region, Stellenbosch, near Cape Town, on the southwestern coast. Its hot, dry microclimate benefits from cooling Indian Ocean sea breezes from the west and Atlantic Ocean winds from the east. The grapes ripen without getting overcooked. In recent years Mulderbosch has upgraded its biodynamic farming methods and equipment in hopes of producing consistent, quality portfolio wines. (Its Sauvignon Blanc gets good reviews.) Judging from the 2014 Faithful Hound, the winery is succeeding.

Now for the spoiler alert: Don’t read any further if you don’t want to know the tearjerker story about the dog on the label. Here it is: “The Faithful Hound label celebrates the memory of the dog who, when abandoned by his master, kept a three-year vigil outside an empty cottage on Mulderbosch Farm. Sadly, he died unrewarded for his loyalty.”

• Dunham Cellars Three Legged Red 2013, $19 — This is a Washington State club member wine which occasionally finds its way onto large store outlet shelves. If you see it, buy it. Port’s on the label; mouth open, energetic, and front left paw extended as if to greet a friend. More on his true story later. The wine is a red table blend of Dunham’s surplus juice from its Cabernet Sauvingon, Merlot, Cabernet Franc and Syrah portfolio (Dunham makes a limited number of cases for each wine, a business strategy that builds high demand). Three Legged Red is luscious, cherry/raspberry expressive, and pillowy soft.

So how did Port get on the label? In 1994, founding winemaker Eric Dunham broke up a fight between a Pit Bull and a stray puppy in a field near his house. The puppy was badly injured. Dunham wrapped him in a blanket and took him to a vet. The puppy lost a leg in surgery, but survived. Dunham kept the dog and called him Port, because with three legs he listed to one side. The winemaker says he created Three Legged Red in tribute to his best friend. Port has since passed on and, sadly, Eric Dunham died in 2014 at age 44, but their amazing spirit lives on.