There’s a reason why Michael David Winery is capturing America’s attention. The wines are flavorful and fun.
Wines are meant to be flavorful, but fun too?
While marketing has a lot to do with it, the personality of the winemaker contributes to what’s in the bottle in subtle ways. If you’ve ever met David Phillips, who is half to the all-brother Michael David Winery team, you’ll know what I mean. He’s a self-described down-to-earth “farmer” most comfortable in bluejeans and denim shirts. The Phillips family has been farming in Lodi, Calif., since the 1850s, and today the brothers represent the sixth generation of wine growers. The winery is celebrating its 30th anniversary this year.

David Phillips recently combined an East Coast trip to visit his son at a Maine college with a tasting of MD wines at the Wine ConneXtion in North Andover. True to his spirit, Phillips insisted on a “circus” theme. (Check out the outlandish group of characters featured on the label of MD’s Freakshow Cabernet Sauvignon ($15.99) — one of America’s top 10 selling wines.) Upon my arrival at the store, a female acrobat was doing backflips in the parking lot while a flamethrower twirled burning objects in the air.
Phillips contented himself inside talking to customers, signing bottles, and promoting Lodi’s growing reputation for crafting high quality wines. There’s a Massachusetts connection. Lodi’s first major vineyard was planted in the 1850s by Bay State native George West, who went hunting for gold and found it in the vines instead. Today, there are 80 wineries and 100,000 acres under vine.

Michael David Winery’s success is firmly rooted in its rich, jammy, and uniquely named Zinfandels and tasty Cabernet Sauvignons. The flagship is 7 Deadly Zins ($16), a blend of old vine Zinfandels whose name is a play on the Phillips’ brothers’ Catholic school upbringing.
The Zin line has expanded with Earthquake ($25) and the Luxury Series wines of Rage, Sloth, Gluttony, and Lust — all selling at $59 each. On this night, they sold for $39.99 a bottle.
In my opinion, some of MD’s best wines are small lot productions of Ancient Vine Cinsault ($19) and Inkblot’s individual bottlings of Petit Verdot and Cabernet Franc ($24.99 each).
Here are tasting notes compiled by the Wine Butler (Michael Pidgeon) and the Wine Novice.
• 2012 Earthquake Zinfandel, $26 — Wine Spectator gave it 93 points, saying this is “Zinfandel at its richest … For all its fullness, it stays balanced and dry.” I say with every sip your palate will rumble to long and satisfying fruit flavors. 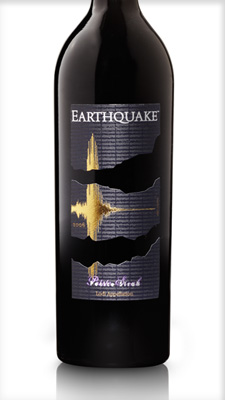 • 2012 Rage Zinfandel, $59 — WS also gave this 93 points, calling it “bold”, “beautiful”, “powerful”  with an “impressive density in texture.” But why pay $33 more for Rage than Earthquake? I found this Zin to be thick — almost syrupy — exceedingly flavorful and peppery. Drink with caution as the name implies.
• 2011 Lust Zinfandel, $59 — Women were buying this as if it were a celebrity lipstick. The tasting notes called it a “seductive Zin that lives up to its name.” The Wine Butler had a sip and said it was like eating a “black berry spice cake.” Think candlelight, flowers, and Dino’s “That’s Amore.”
• 2011 Rapture Cabernet Sauvignon, $59 — I purchased a 1.5L bottle specially priced at $84.99 for the evening. The wine is produced during exceptional vintage years only, according to Phillips, and it sold out at the vineyard. It’s full of black cherry cola, espresso, toasty, and smooth. If you could pour a wine for Grace Kelly, this wouldn’t disappoint.
• 2012 Inkblot Petit Verdot, $24.99 — This late-ripening Bordeaux-blending grape flourishes in sunny Lodi as a single varietal wine. Here it’s blended with Petite Sirah to produce a complex, elegant wine of dense chocolate and sour cherry flavors. Another sold out wine in Lodi that’s worth hunting down.
Send comments to jcampanini@lowellsun.com