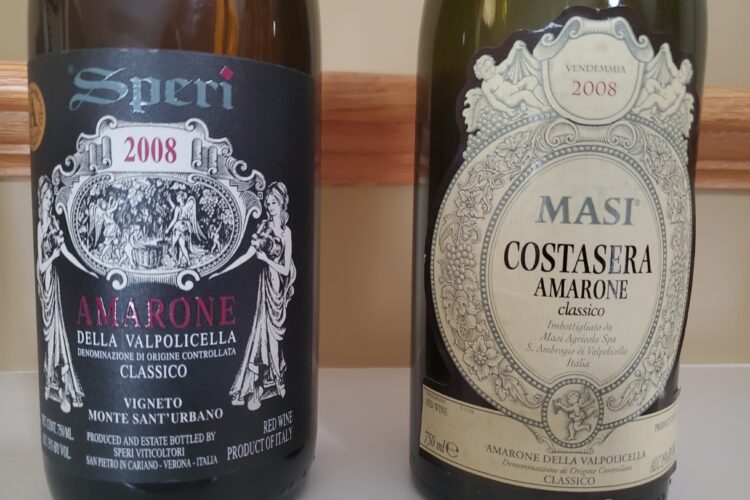 Amarone Della Valpolicella Classico is not a wine that you’d likely choose to drink every day. First, it’s expensive compared to other Italian wines. Second, it is a powerful, opulent, dry red that is best served during prized moments of reflection or as the piece de resistance to a spectacular, substantive meal (osso buco or venison with mushroom risotto come to mind).

Recently, when dinner guests moved from the  table to plush couches by the fireplace, I went downstairs to the wine cellar and brought up two precious bottles from the very good 2008 vintage: Speri Amarone della Valpolicella Classico Vigneto Monte Sant’ Urbano ($85) and Masi Amarone della Valpolicella Classico Costasera ($60). Both producers are highly regarded for crafting this complex, age-worthy, prestigious Italian wine in Valpolicella, a region of hills and valleys located northeast of Verona in the Veneto province.

Amarone (“bitter one”) is made from three primary native grapes – Corvina Veronese, Corvinone, Rondinella – and by a traditional process called “appassimento.” Grapes are placed on wooden mats in outdoor lofts where they are air-dried for up to four months. As grapes lose their liquid, they become dessicated and highly concentrated in extract and sugar. When the juice is fermented, the sugar is “burned off” to almost zero, creating a full-bodied, high-alcohol wine (15% or higher) delivering a sensation of sweetness despite being technically dry. By law, Amarone must be aged a minimum two years in oak barrels before release. Riservas are aged at least three years. 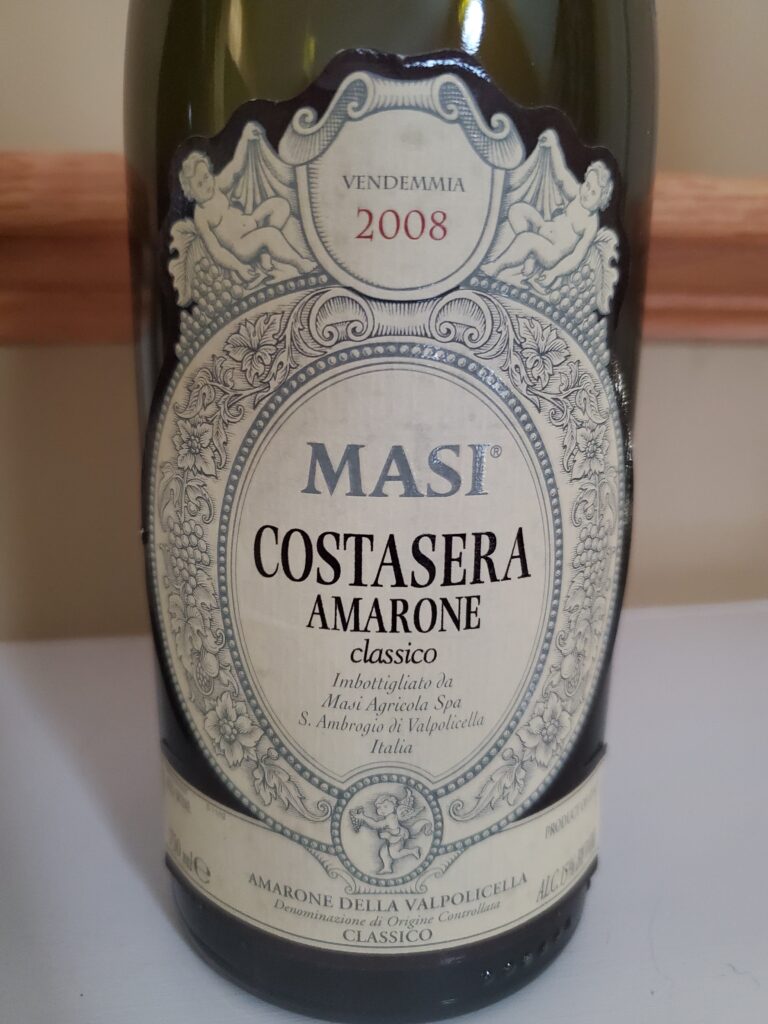 While one can expect luscious, dried cherry, spicy and violet notes from Amarone, there’s always great anticipation when popping the cork. Older Amarones “grow up” to become more sophisticated in secondary aromas and flavors that simply astound the senses. Tobacco, leather, dark chocolate, and espresso are just a few of the mature notes to evolve. If cellared properly, Amarone can age gracefully – and improve – for up to two decades and more. At my senior status, however, I can’t afford to be so patient.

So how did I know it was time to open the 12-year-old Speri and Masi bottles? It just felt right. A special moment had arrived to be shared with cherished friends. That’s what Amarone is all about.

Except for the rainy 2014 growing season, Amarone producers have enjoyed a great run over the past six vintages, with 2010, 2012 and 2015 being classified as “excellent.” Other top producers to look for are: Tommasi, Roccolo Grassi, Dal Forno Romano and Allegrini.

Speri Amarone 2008 – Speri’s Amarone production dates back to the 1950s, making it one of Valpolicella’s oldest  producers. The Mount Urbano vineyard is cultivated on terraces made from stone walls called “marogne” which slow down water runoff and absorb the sun’s heat like solar panels. This wine is very, very elegant from first sip to last. Its sweet cherry fruit comes wrapped in a coating of coffee and chocolate that intermingle with spicy herbs and subtle smoky meat flavors. What a powerhouse. While poised to keep improving with more age, this is Speri-sational right now for maximum enjoyment. Delightful with Italian fruit cookies.

Masi Amarone 2008 – Without a doubt, this is a quality, introductory Amarone that could certainly influence a beautiful evening. It’s slightly beyond its peak though (Recent vintages of Masi Amarone are crafted to be consumed sooner rather than later.) On the palate, it’s smooth and savory and likely to pair well with a broad range of pasta and meat dishes. 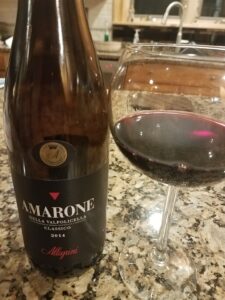