Troublemaker made a lot of noise with its red-blended taste and elegance.

On a gorgeous Saturday evening, my wife Mary Lee and I hosted four other couples in a wine and food pairing extravaganza. Three reds and three whites were served with different foods throughout the evening.
The reds were:
• 2009 Giacomo Fenocchio Langhe Dolcetto, Italy
• 2008 Fess Parker Syrah, Santa Barbara (CA)
• 2011 Austin Hope’s Troublemaker, a red blend from Paso Robles (CA)
The whites were:
• 2010 Zocker Gruner Veltliner, Edna Valley (CA)
• 2011 Airfield Chardonnay (unaoked), Yakima Valley (WA)
• 2009 Stag’s Leap Wine Cellars Kiara Chardonnay, Napa Valley
The ground rules were simple. Each guest was to sample a mouthful of wine and rate it on five criteria: appearance; aroma; body; taste; and finish. Wines were rated 1 to 5, with 5 being the best. (We used wine scoring sheets that can be downloaded online at www.winecountrygetaways.com).
After sampling the wine, each guest was asked to taste the wine with a particular food and consider if it paired well or not.
I was surprised by the results. The reds did better than the whites, and the tasting produced a surprise winner. For the most part the men and women reached a consensus on a palate preference: full-bodied, flavorable and velvety reds.
In some instances, I believe, the food influenced the judging. Some wines went better with the food offerings than others. Let’s start. 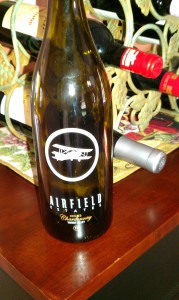 First course: Two appetizers, shrimp provencal and bruschetta with fig and prosciutto, were paired with the Gruner Veltliner. This dry, fruity white was new to many and it got their attention. They liked it alone as a sipping wine than with the appetizers.
Second course: Chef Stella’s Arancini (deep fried risotta balls filled with mozzarella, tomato cream sauce with sage and walnut pesto) was paired with the Langhe Dolcetto, a light-to-medium semi-dry red with mild berry flavors and tannins. It rated well.
Third course: Arugula, radicchio, and red onion salad with blue cheese and balsamic vinegar. To make a point, I selected an oaked chardonnay (Stag’s Leap Kiara) and an unoaked one (Airfield Estates). The crisp, clean, citrusy zest of the Airfield chard won wide appeal over Kiara, which fell flat with its creamy finish (it clashed with the vinegar dressing.)

Fourth Course: Chef T.J.’s savory braised beef short ribs were exceptional. They were complemented by rosemary and parmesan potato croquettes and carrots with fresh tarragon. An opulent, black currant Fess Parker Syrah, with a long, elegant peppery finish, wowed the room. Then the Troublemaker was poured, a blend of syrah, grenache, mourvedre, and petite syrah, and it sparked a fierce debate. The blend produced intense jammy aromas and flavors. I could see from the reactions around the room that Troublemaker’s long, complex finish was sending a message.
By the time the desserts arrived (caramel flan with Kahlua ganache and mocha biscotti), guests were still trying the two big reds to separate what was clearly a close call.
When the judges’ scores were tallied, the rankings looked like this:
1. Troublemaker, 113.5 points, avg. score 22.7
2. Fess Parker, 113 points, avg. score 22.6
3. Airfield, 100 points, avg. score 20.0
4. Langhe Dolcetto, 91 points, avg. score 18.2
5. Gruner, 90 points, avg. score 18
6. Stag’s Leap, 77.5 points, avg. score 15.5 points

Now here’s the corker. Troublemaker was one of the least expensive wines sampled at $15 a bottle. Runnerup Fess Parker was $21. Airfield Estates Chardonnay, third overall in the judging, bested all the whites by a solid 10-point margin. It costs $14 a bottle. Langhe Dolcetto, $12.99, and the Zocker Gruner, $17.99, scored well above the Stag’s Leap Kiara, the least favored wine and the most expensive ($29) on the table. Once again, I think the food pairing had more to do with Kiara’s standing than the wine itself. It’s oak-tinged, creamy taste clashed with the salad dressing.

On this night, we tasted six wines and discovered several excellent values. The food was sumptuous and the conversation delightful. The men retired to the backyard Pergola, smoked cigars under the stars and drank a glass of 2006 Ledson Bellissimo red blend. The women enjoyed a Maculan dessert wine on the deck. After our guests departed, The Wine Novice and his Wine Goddess Wife washed 67 glasses and 40 serving plates before retiring in comfort and complete satisfaction on a wonderful evening.