It’s not only good, it serves a worthy cause. The Bordeaux-style blend recognizes the sacrifice and service of U.S. military members and promotes the Purple Heart Foundation, a nonprofit which provides assistance to veterans and their families. The foundation, in collaboration with C. Mondavi & Family, receives a major contribution from wine sales.

The winemaker is Ray Coursen, a Vietnam War veteran from New Jersey with Bay State ties: He attended college in Massachusetts, met his wife in Boston, and lived on Cape Cod before heading west in the early1980s to start a wine career from scratch. Nearly three decades later, he’s crafted more than 50 highly acclaimed wines.

The 2013 Purple Heart, which retails for $19.99, is the partnership’s first vintage and carries a limited production of 7,500 cases.

“It’s a solid wine. Big, fruity and juicy,” said Coursen in a telephone interview from his own Elyse Winery in Yountville. “I’ve tasted a lot of wine in my time, and this stands up to many wines selling for much higher prices. I’m proud of it on many levels, especially for the cause.”

“I didn’t need convincing,” said Coursen of the project. “I said ‘I do’ and I was honored … Marc and Peter Jr. have carried on their father’s work and been tremendous supporters. “This is truly a special project,” he added. “It’s about us as Americans being willing to help the brave men and women who’ve fought for us and sacrificed so much. They are remarkable people. They are our heroes.”

Coursen, 68, grew up on a New Jersey farm. After being drafted into the U.S. Army in 1968 and serving two years, he traveled Europe extensively before enrolling at UMass Amherst’s Stockbridge School of Agriculture. To pay the bills, Coursen  tended bar and worked at a fine wine shop in Boston where he caught the bug for French wines. The seed was planted. In 1982 he met his wife Nancy, an occupational therapist in Boston schools, and a year later they moved to California. 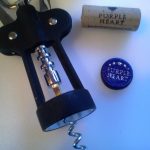 Coursen took multiple jobs in the vineyards to learn the wine business. Eventually, legendary White Hall Lane winemaker Art Finkelstein took him under his wing. Coursen’s blending skills flourished. In 1997, after a decade of working for various interests, Ray and Nancy bought a small winery and vineyard and gave their existing brand — Elyse Winery — a permanent home. (Go to www.elysewinery.com for more information).

For Coursen, the 2013 Purple Heart blend is mission accomplished. “The fruit is beautiful. And let’s not forget the cause. These guys and gals serving our country deserve all the recognition they can get.”

Purple Heart Wines (www.purpleheartwines.com) is distributed in Massachusetts by United Liquors. It is available at Colonial Spirits of Stow, where it is now on sale for $16.99.

I recently sampled Purple Heart with my wife, the Wine Goddess, who grilled two sirloin steaks for the occasion. Here’s my review:

• 2013 Purple Heart Napa Valley Red Wine — Whether you’re the Grill Sergeant or the Drill Sergeant at the barbecue, take command with this dark-ruby colored and fruit-forward Bordeaux blend (Merlot-Cabernet Sauvignon-Cab Franc-Petit Verdot). It marches triumphantly with thick, juicy steaks, chops and burgers. Merlot dominant (84 percent), it exhibits lush, extracted blue- and blackberry fruits; they flourish on the nose and burst forth in the mouth. The texture is smooth, the finish layered and lingering with wild herbs and spices. The wine definitely outperforms its price. Enjoy now with its big fruit guns blazing or wait a few years ’til it hits a peak of restrained power and finesse. Whichever you choose, Purple Heart won’t stand down on pleasure!