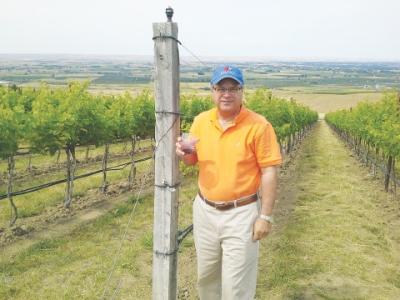 I’m back from a 10-day trip to the Great Northwest in which the Wine Goddess and I logged more than 1,100 miles visiting 18 wine-tasting rooms and six vineyards in Oregon and Washington State.

Lewis and Clark we weren’t.

Martin and Lewis — as in Dean and Jerry — was more like it.

When the Wine Goddess started questioning the hours of time we were spending on the road, driving from place to place, it was Day 5.

“Who put this trip together,” she asked, “the railroad? It’s three hours of desert between each stop?”

We were motoring along the Columbia River Gorge, carved out during Ice Age floods that left both states with a natural boundary line, great water views, and hairpin highway turns. The hot eastern Washington landscape was beautifully barren for the most part, with brown hills and mountains rising in the distance and golden wheat fields down in the valleys.

“It’s amazing anything grows out here,” she said, looking at the Rand McNally map I purchased weeks ago to plan the trip.

Driving west from Walla Walla, Wash., to Hood River, Ore. — a distance of 181 miles — I admitted to the Wine Goddess that I had flunked geography in college. With that I took full responsibility for miscalculating the mileage between the dots I had excitedly connected on the map while back home in Lowell.

“You did see that Washington State is at least three times the size of Massachusetts,” she said.

I kept my dignity and clammed up. All I could think about was arriving in Hood River, seeing the snow-capped, 11,250-foot summit of Mount Hood, and getting to the first winery on the list, Cascade Cliffs. I multiplied in my head the number of wines we had tasted in the four days in Walla Walla: six per tasting times nine tasting rooms equals 54 different wines. Adding in three vineyards, including Drew Bledsoe’s Doubleback Winery, the figure grew to 70.

Yes, the endless road at times tested my 62-year-old stamina. But I was happy to be alive, especially after our Boston-to-Seattle flight made an emergency landing in Minot, N.D., when a “burning smell” was detected in the passenger cabin. I admit I, like the other 129 passengers on board, were nervous when the smell grew stronger and the plane started its descent from 34,000 feet. And then, just like that, the smell was gone and we were on the ground. (Later, we learned that the quick-thinking pilot, suspecting an air conditioning circulator problem, turned off the cabin’s electrical system, which cleared the air. It turned out that a blown fuse was the culprit.)

So I was relieved to be on the road, not like Jack Kerouac, but with the Wine Goddess telling me to slow down (the speed limit was 70) and watch where I was going.

After Hood River we visited wineries in Oregon’s Willamette Valley, the home of some of America’s best Pinot Noirs, before heading to the coast for two days of relaxation on the incredibly beautiful Cannon Beach. By then, we had pushed the total number of wines we had tasted and logged to 136. That evening at dinner the Wine Goddess almost fell out of her chair when I ordered a martini.

“I can’t sip another drop,” I replied in feigned submission. “My toenails are turning purple.”

We laughed, taking in a spectacular view of the crimson sun slowly being swallowed up by the boundless Pacific Ocean, and then toasting God’s goodness, America’s greatness, and our blessed Wine Country adventure.