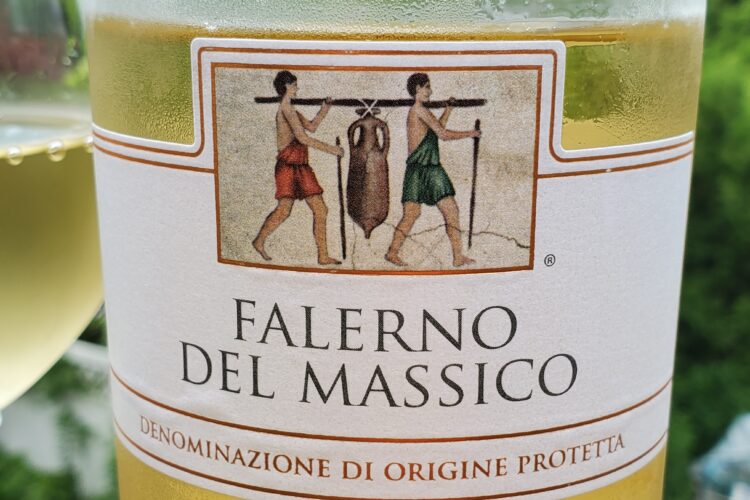 I’ve made a good start on the new year stocking up on some rare and ancient white wines from southern Italy. Several are from exotic places where grapes grow in volcanic soils or t by the sea shore. The wines are local sensations and in most cases have very limited production. Still, the alert wine lover can find them at shops specializing in Italian wines. (Vino Italiano in Waltham is one such place.)

I am making a big bet on Italian whites in 2021. From the cool northern Trentino-Alto Adige region to Veneto’s Friuli-Giulia to down south in Campania and Sicily, vintners are stepping up their game on producing high-quality, complex and delicious wines from some of the most unique grapes in the world.

Here are five to drink now and all year round.

The beauty of Salina, one of seven islands in the Aeolian archipelago 30 miles north of Sicily, is unquestioned. Europeans have turned this once hidden gem into a vacation resort, much to the joy of Salina’s 2,400 residents who can earn an income from their own generous hospitality.

The mountainous island is also one of the few remaining places in Italy where the ancient  white grape Malvasia di Lipari is still cultivated.

Lipari, the largest of the Aeolian islands, is considered the traditional home of Malvasia, hence its inclusion in the grape’s name and the reason for the Malvasia delle Lipari DOC appellation.

Several related Malvasia varietals have fallen into near extinction over the years. But Malvasia di Lipari has survived largely through the efforts of producer Carlo Hauner who revived interest in the grape in the 1980s. Annual production remains small, however, and the bulk of the crop goes into making sweet passito wines that can be quite expensive.

And that’s why Colosi’s still wine version from Salina is such an exclusive, exotic treat

The moderately acidic grape excels in Salina’s warm Mediterranean climate where it grows mostly in terraced vineyards planted in volcanic and limestone soils.

Secca del Capo translates to “Dry of the Head”, a name reflective of Cape Faro and its crowd-pleasing lighthouse.

The golden-colored wine I tasted is 100 percent Malvasia. My first impressions can be described  in four words: fresh, lemony, soothing and mineral.

Aromatic and tasty – pear, lemon – the wine yields a discreet marine saltiness on the long, dry finish. The dryness is derived from Colosi’s extended alcoholic fermentation process in steel tanks that reduces the residual sugar content.

You can drink this as an aperitif, or with seafood appetizers, white fish dinners, and even salty broiled cod and fried smelts. Yummy, indeed.

The cost ($28) might seem steep for a white wine, but Colosi’s Malvasia di Lipari is a rare find, just like a Caravaggio painting.  Think of taking a sip and being transported to a faraway, pristine, sunswept island where 6th-century Greeks first planted vines under a blue sky in view of Stromboli and its fearsome volcano. Priceless.

Fiano is another ancient grape and wine once favored by Roman popes, emissaries and European aristocracy. Today, it is considered one of southern Italy’s noble white grapes – along with Falanghina – and the best quality examples of this wine originate in Campania’s Fiano di Avellino DOCG.

Villa Matilde is a leading premium wine producer in the region, and its 100 percent Fiano bottlings are known to be site specific for delivering unique characteristics. There are 20 wine-producing villages in the Avellino appellation, and most vines are planted in sandy-clay soils littered with volcanic material. 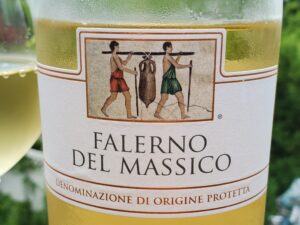 Villa Matilde’s Fiano draws its grapes from vineyards in Lapio, which is known for lending heightened aromatics to its wines.

This Fiano is an elegant wine boasting pear, apple and citrus flavors that swirl among notes of herbs, hazelnut and mineral elements. While it finishes dry, the palate experiences a honeyed texture and soft feel.

Villa Matilde also produces Falerno Del Massico, a straw-colored bianco made from another famous ancient grape, Falanghina, which thrives in Campania’s northwestern corner along the border with Lazio.

Once on the brink of extinction due to the ravages of phylloxera, Falanghina  stormed back to prominence in the 1970s when Villa Matilde and other producers replanted vines. Today, it is Campania’s leading white varietal.

The wine takes its name from a 2,000 year-old ancient Roman appellation, Falerno Del Massico, that was codified as a DOC in 1989. The district’s boundaries remain largely intact from the days of the early Romans. Vineyards are planted around two major land features, the extinct volcano Roccamonfina to the north and massif of Monte Massico in the appellation’s center. The zone’s eastern end stretches to the Tyrrhenian Sea, where some vineyards slope down to the shoreline.

I’ve tasted Villa Matilde’s Falerno Del Massico every year since 2015 and it is consistently fresh, fruity and invigorating. It’s another wine with a great story to tell, once being the prized beverage of Roman elites and Caesar’s legions. This wine is aged three months in steel tanks and sees no oak. Still, there is a creaminess to the texture while a touch of vanilla layers the peach, tangerine and lemon flavors that fill the mouth.

Both Fiano and the Falinghina-based Falerno Del Massico are delicious wines that can age up to five years with proper cellaring.

Greco di Tufo is one of Campania’s most distinctive white grapes, and the best of its kind deliver notes of almond and stone minerality to go along with delicate aromas of oranges, pear and quince. It’s a full-bodied wine that also exhibits a bit of tannic grip.

Like most ancient grapes from this region, Greco di Tufo is very receptive to its terroir. Terredora’s grapes come from Montefusco, a town in the province of Avellino that is situated on a hill overlooking the Sabato River. These are estate grapes grown on hilly sites in clay, calcareous soil that transport rich mineral nutrients to the vines.

“Loggia Della Serra” (loggia of the greenhouse) is fermented in steel tanks at cool temperatures and aged on the lees for several weeks. The result is a deep, golden-colored, complex wine supported by good acidity. Apple dominates the taste profile and mixes well with peach and citrus. This is a very smooth wine with a long aftertaste.