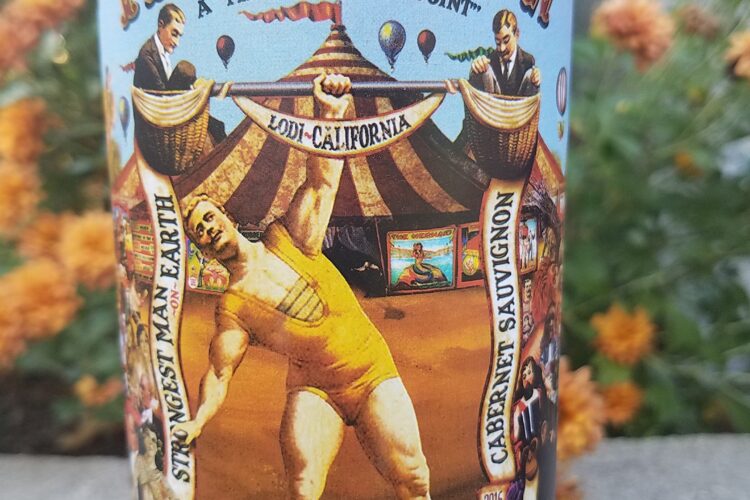 It’s damp and gloomy outside mid-way through one of the coolest, dislodged April in U.S. history.

Naturally, COVID-19 and government shelter-at-home orders have a lot to do with it.

But people still have eat, drink and live, right?

So what’s one to do?

Put on my black Federoa, old Chicago-style Elliot Ness raincoat and soft leather gloves, fire up the patio grill, defy the drizzly rain with the weight of January sleet, and cook up extra thick, juicy cheeseburgers.

The Wine Goddess, my wife Mary Lee, looks on in fear and delight from the safe dry side of the deck’s sliding glass door: Fear that I will blow something up turning up the heat and delight that I am actually cooking.

Hey, this is time to break out from the doldrums, I mouth through the mist. No more Coronovirus Task Force updates – at least for tonight. Grill and thrill.

Just the question I wanted to hear.

“Get a bottle of Freakshow,” I implore. “To the left of the Barolo bin in the wine cellar. Not the Zinfandel – the Cabernet Sauvignon.”

I’m a big fan of Freakshow wines, the marketing genius behind the brand, and brothers David and Michael Phillips whose collaboration is cemented in the California winery’s name – Michael David Winery. The Phillips family has farmed in Lodi and the San Joaquin Valley since 1850. The brothers represent the family’s fifth generation of grape growers, with a sixth generation – Mike’s son and daughter – also joining the enterprise.

I’ve met both Mike and David over the years at The Wine Connextion in North Andover, MA. They’ve built up a strong relationship with the Messina family – the brother-sister team of Sam and Tina (and now Sam’s son David) – who run the popular wine store. Each Phillps brother has his own individual personality and style, but whenever they host a winetasting event it’s action-packed and entertaining, complete with back-flipping circus performers and fire-eaters.

Despite the party atmosphere, the wine always takes centerstage. Freakshow is one of America’s most eye-catching and best-selling brands – a tribute to the Phillips’ marketing vision to put fun as well as quality into every bottle. Freakshow bottle labels inspire childhood days of going to the circus. You can study the collage of colorful characters on the bottle, sip the wine, and be transported back to safer, happier times.

The Phillipses are also two of the biggest ambassadors of the #DrinkLodi campaign promoting the wines of Central Coast vintners. Lodi might not have the prestige of Napa Valley and Sonoma, but it’s got plenty of exciting and elegant wines that sell for a whole lot less than their up-coast counterparts.

There are four Freakshow wines – Chardonnay, Cabernet Sauvignon, Zinfandel and Red Blend.  Each sells for $19.99 a bottle, although Costco, The Wine ConneXtion and N.H. Wine & Liquor Outlets offer the wines for $3-$4 less.

I recently broke out two favorites.

The Cabernet Sauvignon, featuring The Strongman on the label, is a jammy, silky red with a wealth of rich flavors – cranberry, raspberry, chocolate, vanilla and espresso. Medium bodied and spirited, Freakshow Cabernet possesses the muscle for thick cheese- and bacon burghers as well as any grilled meats.

The Chardonnay, meanwhile, is a summer staple. While crisp and bright, it reaches a fine balance with a soft, creamy texture and exotic fruits – mango, stone fruit. Adding to the appeal are finishing touches of butterscotch and cocoanut. “Madison”, the daughter of Poseidon, makes waves on the bottle’s label. I’ve seen brand on sale for as low as $14.49 a bottle at some local outlets, so be on the lookout.

At present, the winery is offering a special Mother’s Day three-bottle package of Freakshow Chardonnay, Cabernet Sauvignon and Zinfandel for $58 and free shipping. Go to www.michaeldavidwinery.com for details.