For years Tenuta San Guido estate’s “Guidalberto” has lived in the shadow as a second label to “Sassicaia”, the Marchesa Mario della Rochetta’s legendary Bordeaux-style wine that launched Italy’s Super Tuscan phenomenon in the 1970s. 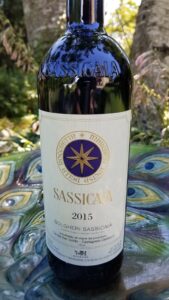 Now run by son Nicolo`, Tenuta San Guido enjoys the best of both worlds. Sassicaia, which retails at $250 a bottle, usually sells out its entire 180,000-bottle production upon release. The 2015 vintage was named Wine Spectator’s 2018 Wine of the Year and the 2016 garnered a perfect 100-point score from Wine Advocate’s Robert Parker. Today, Sassicaia is No. 6 on Wine-Searcher.com’s most popular wine list.

So what about Guidalberto? For the cost-conscious connoisseur, it might be the next best thing to drinking Sassicaia.

Guidalberto costs $60 and there’s plenty of it (200,000 bottles produced yearly). Although its Bordeaux blend of cabernet sauvignon/merlot varies from Sassicaia’s (cabernet sauvignon/cabernet franc), grapes are sourced from the same Bolgheri estate founded by Marchesa Mario in the 1940s.

Don’t get me wrong: Sassicaia is an iconic wine and a collector’s favorite. For many wine lovers on a budget like me, however, it’s a once-in-a-lifetime purchase for a special occasion.

Still, I would not pass up the right opportunity to get a taste of it. So recently I plunked down $85 for a seat at a dinner featuring seven Italian wines from importer Kobrand, including Sassicaia and Guidalberto. The price was a bargain for the liquid gold – and food – on the menu. (La Campania restaurant owner David Maione hosted the event at Vino Italiano, his wine shop in Waltham.)

The wines were all Super Tuscans, an Italian category owing its distinction to Bordeaux varietals – cabernet sauvignon, cabernet franc, merlot, etc. – used in the blend and to the courage of Marchesa Mario. Nearly 80 years ago, he was the first Tuscan winemaker to break with tradition and plant international grapes. His persistent – and frustrating – experimentations eventually led him to plant vines on a gravelly, stony site (“Sassicaia”). The hillside vineyard later yielded the gorgeous fruit to create the commercial wine sold today. In 1972 Sassicaia made a sensational debut  and the rest is history.

On this night we drank the 2014 Sassicaia, the offspring of a difficult growing season. Experts’ initial reviews of this vintage were subpar by Sassicaia standards, but the wine has matured nicely in five years and sparked a brighter reassessment. What I tasted was a sumptuous wine of bold black fruit, wild herbs and spices. It paired fabulously with a lamb chop, potato croquette and broccoli rabe. The Wine ConneXtion in North Andover is selling the 2014 for $179 a bottle ($199 for 2016 Sassicaia).

But it was the 2017 Guidalberto that captivated my palate. Created in 2000, Guidalberto offers Sassicaia’s quality pedigree at an accessible price point. Though it lacks its cousin’s brute tannic force (recent Sassicaia vintages need 5-10 years in the cellar), Guidalberto is powerful, well-structured and approachable right now. It showed a dark crimson color in the glass and opened expressively with ripe fruit – black cherries, berries and plum. The wine has personality too, enhanced by cedar, orange peel, lavender and spice notes. Guidalberto proved sublime with a plate of risotto ai funghi – fresh morel mushrooms, creamy arborio rice, white truffle oil and shaved parmigiano.

For those keeping score, three top industry critics have given Guidalberto an average rating of 93 points. Not bad for a second violin in Tenuta San Guido’s Super Tuscan symphony. For the best local deal try Vino Italiano where Guidalberto is on sale for $43.40 a bottle. Across the border, New Hampshire’s price is $41.99 through Sept. 2.