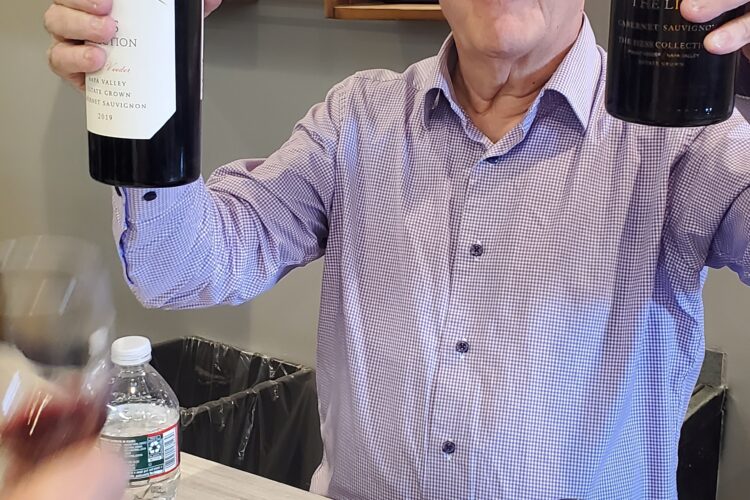 “Where’s the value in drinking Cabernet Sauvignon from Napa Valley when it costs $75 or more a bottle?”

I hear that question a lot from friends and acquaintances who recoil at paying big money for Napa’s signature red wine.

My answer is simple:

If you love Napa wine, don’t give up on it. Just work harder to find the best deals.

That means being on the lookout for exclusive wines selling at a discount.

Several weeks ago, I came upon such a deal at the Wine ConneXtion (WC) in North Andover, where seven premium Napa wines from Hess Persson Estates were showcased at a free public tasting.

(For the unfamiliar, the Hess legacy is an inspiring one. Donald Hess launched the winery in 1978, being one of the first pioneers to plant elevated vineyards high atop Mount Veeder overlooking Napa Valley. The Hess Collection brand is his namesake.

In 2012, Hess asked his son-in-law Tim Persson and wife Sabrina to join the team. They moved from South Africa to Napa in 2014 and now oversee much of the family business. They are responsible for launching Hess’ next generation wines called The Lions Head Collection.)

At the top of WC’s tasting menu was the 2018 Hess Collection “The Lion” Cabernet Sauvignon, the winery’s signature Mount Veeder bottling that is offered exclusively to club members and rarely makes it to a public sale. The 2018 lists for $225 a bottle at the winery and has earned outstanding ratings from wine critics.

While I had no intention of purchasing anything pricey, I was curious to taste Hess Persson Estates’ best wines, especially those from Mount Veeder, a revered Napa Valley sub-appellation.

Over the course of 45 minutes I tasted the wines and landed on one that absolutely blew me away: the 2019 Hess Collection Mount Veeder Estate Grown Cabernet Sauvignon. The blend includes 17% Malbec and 3% Petit Verdot.

Big, bold, luxurious and delicious, the Mt. Veeder Cab pushed all the right buttons that come from drinking a superior quality wine.

It listed for $52.99, a special WC price representing a 41 percent discount from the winery’s $90 suggested retail price.

According to David Messina, WC’s wine and spirits buyer, the sales price still stands for the store’s remaining bottles.

To better understand the star-studded value of this wine, one must appreciate the exclusive terroir from which it originated – Mount Veeder AVA.

Located in northwestern California’s Mayacamas Mountain Range, Mount Veeder’s land mass covers 16,000 acres of which 85 percent is dense forest. Vineyards are confined to just 1,000 acres, mostly on rugged, steep-sloping terrain that limits the use of machinery to tend vines and harvest grapes.

Vineyards rise from 600 feet above sea level to 2,400 feet – the highest in Napa Valley. The elevation guarantees sunny exposure and cooler temperatures.

In the prehistoric past, before Mount Veeder was formed in volcanic eruptions, the area was covered by ocean waters. Today, ancient sea deposits mix with shale, clay, sandstone, and volcanic material to create one of Napa’s most diverse soil types.

Temperature-moderating breezes that sweep in from nearby San Pablo Bay provide a Mediterranean-type climate – rainy in winter and spring and warm and sunny in summer and fall.  Thick-skinned grapes like Cabernet Sauvignon, which need longer hand times on vines to fully mature, excel in these conditions.

First, the mountain fruit is gorgeous. It forms the core of a beautifully balanced, velvety smooth wine of intense aromatic sensations and voluminous spicy flavors.

Vanilla, mocha and bitter chocolate mix seamlessly with lush black raspberry and cherry. None of it overwhelms the other. It’s a tribute to the winemaking team, headed by David Guffy, that the purple-colored wine, which ages for 22 months in new French oak barrels (80%), retains such an authentic Cab expression.

Second, while there’s a good head of alcohol (14.4%), the wine stays focused on delivering a mouthwatering vibrancy that persists to the finish and beyond.

While this wine will cellar gracefully for years to come, I’m planning to make it a centerpiece of upcoming holiday meals and celebrations. You should to.

Other Hess wines tasted – with suggested retail price and WC pricing – are as follows:

2018 Hess The Lion, Mount Veeder, Cabernet Sauvignon, SRP: $225; WC: $199 – Only the very best hand-selected Cabernet Sauvignon (84%) and Malbec (16%) from  Hess’ mountain vineyards find its way into The Lion. It’s Donald Hess’ signature wine and only 693 cases were made in 2018. In a word, it’s exceptional. The depth of this wine, with all its harmonious components, takes your breath away. It gives new meaning to savory. Black cherry and plum fruit mix with mocha, espresso and licorice on a luxurious frame. The Lion roars with pride. James Suckling gave it 95 points, Wine Spectator 94 and Vinous’ Jeb Dunnock 92+.