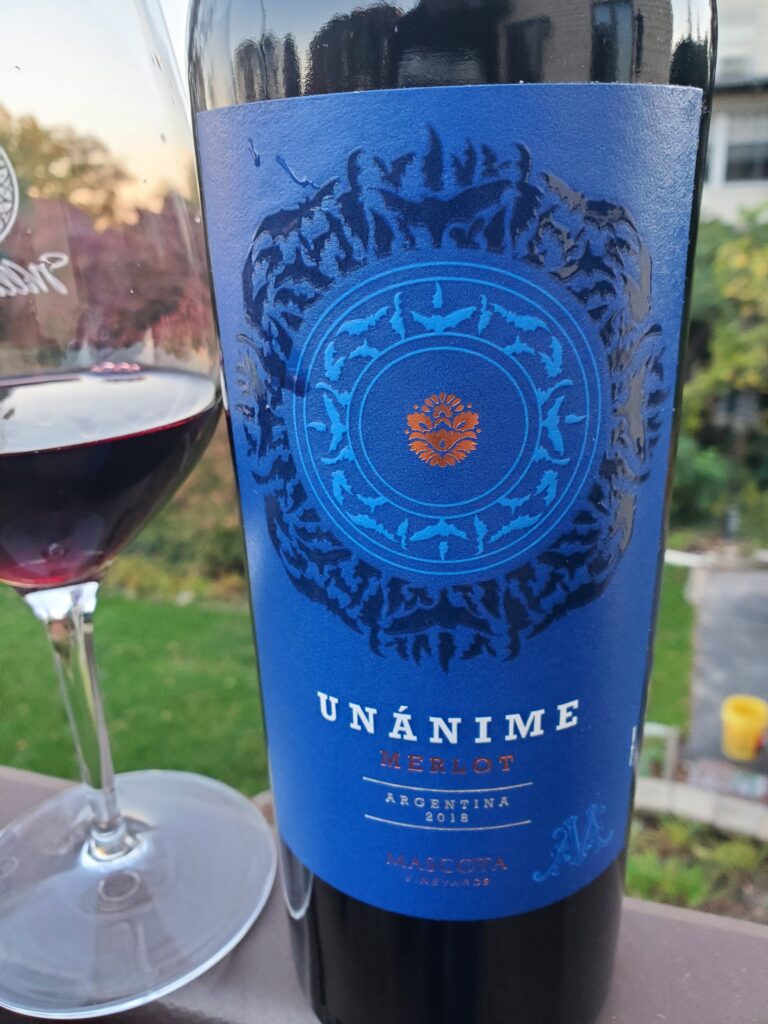 Mascota Vineyards, located at the foot of the Andes Mountains in Mendoza’s Uco Valley, is well regarded for its premium Cabernet Sauvignon, Malbec and sparkling wines yet one of the winery’s “secret” gems is Unanime Merlot.

When veteran winemaker Rodolfo “Opi” Sadler launched the Unanime brand nearly seven years ago, a 100 percent Merlot was on the wish list. He wanted “all things to come together,” just like the English translation of “unanime” (unanimous) implies.

Well, the 2018 Unanime Merlot is definitely a unifier and one of Argentina’s top wines of its kind. It exhibits a lush palate, gorgeous blue fruit, soft tannins, and a wonderful touch of oak. Wine critic James Suckling gave it 93 points – a score that rivals some of the top Merlots from Bordeaux. The best part? Unanime Merlot’s retail price is $24.99.

Mascota Vineyards, founded in 2010, has an annual production of 2.5 million bottles and has enjoyed a meteoric rise since Sadler joined the enterprise.

In 2014, at the International Wine & Spirits Competition,  Mascota was named the “Best Argentine Wine Producer of the Year”.

As for Unanime, it is touted on Mascota’s website as the best-selling Argentine high-end wine brand in the United States. Prices range between $20 and $30 a bottle.

Unanime wines stand out for their quality, according to global wine critics who follow the winery’s progress. In what I’ve read, a lot of it has to do with Sadler’s protective guardianship of the winery’s sustainable farming protocols and respect for the land.

Grapes are hand selected and, after crushing, undergo temperature-controlled maceration and fermentation using native yeasts. All red wines are aged at least 12 to 16 months months in new French oak barrels. Sadler aims to create a velvety smooth texture and well integrated oak taste that is indicative of the Unanime line.

Unanime Merlot fruit originates in the town of  San Carlos which is situated in the heart of the Uco Valley. The Andes Mountains border the western end, where vineyards rise to elevations of nearly  3,300 feet. To the east, vineyards reside in lower-lying hillsides that separate the valley from Mendoza.

Soils are diverse and deep, consisting of a clay and rock base topped by a sandy, stony layer laden with minerals. It’s good terroir for producing big, bold red wines.

While temperatures are cool, there is plenty of sunshine for grapes to mature steadily during a long growing season.

True to Sadler’s philosophy, Unanime Merlot is a silky, harmonious wine. I enjoyed it immensely. The red and blue fruit is concentrated and juicy.  Secondary flavors of cherry chocolate and black pepper emerge mid-palate and add delicious complexity. A slight saline minerality comes through on the long finish. It’s fresh now and I believe it will develop in stature with a bit of cellaring.

I highly recommend Unanime (14% alcohol) for holiday meals and overall enjoyment with friends and family.

Shoppers can find Unanime Merlot and other Mascota portfolio wines online at Total Wines and More. If you buy direct, the Merlot is listed a “limited time special” price of $19.99.