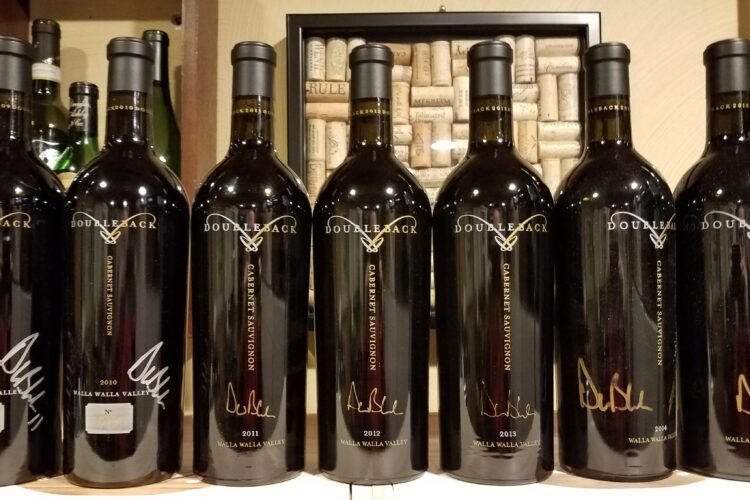 Whether you’re a New England Patriots fan or not, you have to marvel at the high quality performance of the game’s No. 1 quarterback, Tom Brady. At age 42, TB12’s winning consistency at football’s most demanding position makes him the greatest all-time NFL player on many sports analysts’ lists.

So when the defending Super Bowl champions open the 2019 season Sunday night against the Pittsburgh Steelers, what better way to recognize Brady’s outstanding achievements than with wines worthy of his success?

I’m suggesting two big, bold reds – Brady Vineyards and Doubleback – that will have your guests going gaga as the GOAT surgically strikes at the heart of the Steelers defense with precise play-calling and execution. Each wine has a story to tell, and that’s really the beauty of having them huddle with the crowd. So let’s begin.

Brady Vineyard Cabernet Sauvignon 2016 , Paso Robles, $19.95 – Brady Vineyard has no connection to TB12, but the winemaker’s stellar career – first in Texas and then in California – makes him an MVP in two states. Don Brady (yes, it’s for real) is his name. He’s credited with almost single-handedly reviving the Longhorn State’s glorious 19th-century wine industry, which had fallen by the wayside after the discovery of oil. Brady’s award-winning Texas wines were served at several White House functions under two presidents, Ronald Reagan and George H. Bush. In 1991, the Texas Wine & Grape Growers Association gave Brady its highest honor for outstanding leadership – an award similar to TB12’s future induction into the NFL Hall of Fame. Soon after, Brady joined Delicato Family Vineyards in Paso Robles (CA) and led the winemaking team to the International Wine and Spirits Competition’s USA Winemaker of the Year award. But the best was yet to come. In 2001, Brady joined Robert Hall Winery where he’s picked up two winemaker of the year awards. Then in 2010, Robert

Hall bested 600 California State Fair competitors to become the first Central Coast winery to be awarded “Golden State Winery of the Year.” Don Brady vs. Tom Brady? I think we can reasonably say both are at the top of their respective games.

The Brady family vineyard is a largely waterless 24-acre site in Paso Robles’ Estrella Valley. Only 908 vines are planted per acre to give vines a wide berth to seek out underground water and nutrients which maximize concentration levels. The listed red is a blend of estate-grown Cabernet Sauvignon (80%), Cabernet Franc (13%) and Petit Sirah (7%). The winemaker presses the skins following initial maceration and adds the extract to the juice. The separate wines mature in oak for 18 months before being assembled in stainless steel tanks. Brady Cabernet is a delicious wine and for the price it’s one of California’s best bargains. Rich, opulent and silky smooth, this crimson-colored red is loaded with blackberry fruit and topped off with hints of toasty vanilla and forest spices. While the wine is sparsely distributed in New England, it is available at the Wine ConneXtion in North Andover. Get it before kickoff.

Doubleback Cabernet Sauvignon 2016, Walla Walla, $92 – This is the top-tier wine of Patriots’ Hall of Fame QB Drew Bledsoe who co-owns Doubleback with his wife Maura. Since its first vintage in 2007, Doubleback has gained wide recognition for its rich Bordeaux-style fruit character and luxurious texture. As in his stellar NFL career, Bledsoe’s wine playbook follows precise details; he now has four terroir-driven vineyards to call his own, plus a newly built 14,000-square-foot winery and tasting room that is a must-see Washington State attraction. His premium red is a well-integrated mix of Cabernet Sauvignon, Petit Verdot, Merlot and Malbec. Yes, it’s a bit pricey, but for a season opener where the Patriots’ sixth Super Bowl banner will be unveiled at Gillette Stadium, there’s no better bottle to uncork than one from DB11 who helped build the foundation for the Patriots’ and Tom Brady’s glorious success.