Tis the season for miracles, but who’d expect they’d come in the shape of wine bottles?
The four signed wine bottles I wrote about in last week’s column brought in $6,500 at the WCAP Salvation Army Radiothon.
Kudos to Saturday morning talk show host Warren Shaw and his WCAP crew, Fred Simon, Artie Sutcliffe, Jerry Nutter, owner Sam Poulten and all the rest who volunteered during the daylong event.

And certainly many thanks to the people who called and made bids on the wine bottles. Here’s a recap on the winning bids: 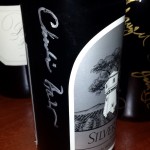 • UMass Lowell Chancellor Marty Meehan won the Drew Bledsoe-signed Doubleback Cabernet Sauvignon (2011) with a bid of $1,500. He also picked up the 3-liter bottle of Boogle Phantom Red, signed by the entire UMass Lowell hockey team, for $1,000.
• Lowell City Manager Kevin Murphy took home the magnum bottle of Mossback Pinot Noir signed by the 2014 City Council for $1,000. As Shaw pointed out, it’s the council that hired him for the job so he might as well have a memento.
• Jerry Flynn, executive director of the N.E. Police Benevolent Association, made a $2,000 donation to the Salvation Army and picked up a 2009 Silver Oak Cabernet Sauvignon signed by Gov.-elect Charlie Baker and Lt.Gov.-elect Karyn Polito.
• And I would be remiss to forget Lowell’s Steve Gendron, who once again donated his unsuccessful bid of $500 on the Bledsoe bottle to the Salvation Army.
The good news is there are two signed bottles left, both reserved for the Sun Santa Fund. They are a Charlie Baker-Karyn Polito Silver Oak bottle and another Mossback magnum signed by the City Council. If interested, send your name and bid to Chris Tierney at ctierney@lowellsun.com or call him at 978-970-4699. The bidding closes on Friday night at 5 p.m. and the winners will be announced on The Sun’s Facebook page.