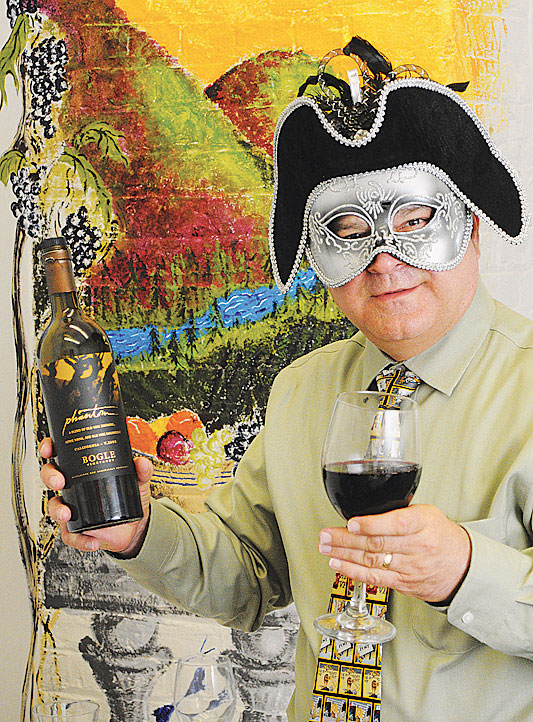 Bogle Vineyards’ Phantom red wine had a unique effect on the Wine Novice.

Andrew Lloyd Webber’s The Phantom of the Opera remains my all-time favorite Broadway musical. I’ve seen touring productions in Boston and Providence but never with the original stars, the great Michael Crawford (The Phantom) and equally superb Sarah Brightman (Christine Daaé). My wife, the Wine Goddess, saw the London production with Crawford and Brightman at peak performance when she was flying international routes as a TWA flight attendant. Then she met me, her Two-Buck Chuck, and changed her flight pattern to domestic only. Lucky me.
So what does any of this have to do with wine? Regular readers of this column already know the answer. Nothing and everything.
If The Phantom of the Opera had stashed away a good bottle of wine in his subterranean Parisian lair — instead of a mysterious mirror — things might have turned out differently in 1861 for he and his reluctant songbird, the beautiful Christine.
The Phantom had panache. He carried it off with a fabulous cape, mesmerizing stare (behind an elegant white mask) and an aged, full-bodied and charming voice that could melt an iceberg. Christine, however, though an angel of music, needed more than an organ grinder to pop her cork: She craved a luscious blend of life’s worldly offerings, and wanted to experience them with a sharing and caring partner.
Could the Wine Novice have saved this relationship?
With all due respect to the genius of the knighted Mr. Webber, the answer is “Yes.”
Charles Dickens wrote, “Wine in moderation… has a thousand pleasant influences. It brightens the eye, improves the voice, imparts a new vivacity to one’s thoughts and conversations.”
While the Phantom made the music of the night, he couldn’t make Christine Daaé love him. The cellar dweller should have wooed his love with a wine cave of Grand Cru Bordeaux and Brunello di Montalcino.
Recently, I discovered a California red wine from Bogle Vineyards that is magnificently named “Phantom.” It is a red blend of two old vine varietals — Zinfandel (51 percent) and Mouurvedre (2 percent) — and Petite Sirah (47 percent).
The wine is blended from home-grown grapes in Sacramento and then aged in American oak for up to 30 months, a fermentation process that smooths out the tannins and give it a silky mouthfeel. The taste is big and lush. Unlike its name, Phantom didn’t vanish on the finish but gave a lasting impression of deep, dark fruit.
A friend who sampled Phantom declared it rich in raspberry with a peppery zest. She called it right. The winemaker’s tasting notes say, “Bogle’s apparition of fierce berry and sensual spice returns to tease and tantalize.”
It’s hard to imagine Christine Daaé sipping a glass of this ruby red without warming to the man behind the mask.
At $15 a bottle, this 2008 vintage blend is only going to get better in the cellar. If you see this “Phantom” on a store shelf, buy it before it disappears into the night.
q
RECENT TASTINGS: 2011 Frisk Prickly Reisling, $15 — A blend of Reilsling (89 percent) and Muscat Gordo (11 percent) this cool, refreshing wine in a green bottle is full of lime sparkle that tickles the tongue with long flavors. Frisk is a great complement to spicy dishes or as a welcoming party beverage. We had with tuna sushi at Napa East in Nashua, and then purchased a bottle at the restaurant’s wine shop.
2009 Laetitia Pinot Noir, $22.99 — This Centra Coast vintage is a mix of 10 estate clones, and the winemaker’s creation is superbly cherry and chocolate delicious. It’s balanced all the way through, from the velvety mouthfeel to the complex and satisfying finish. We enjoyed this with grilled salmon and sweet mashed potatoes. Yummy.
Looking ahead, I’ve purchased a bottle of Spaceman, a California red blend produced by former Red Sox pitcher Bill Lee. I was hoping to taste it on Memorial Day but the Phantom showed up instead. We’ll soon find out if this is worth putting in the clubhouse.
Follow Jim Campanini on Twitter @suneditor and read Wine Novice at lowellsun.com/winenovice.