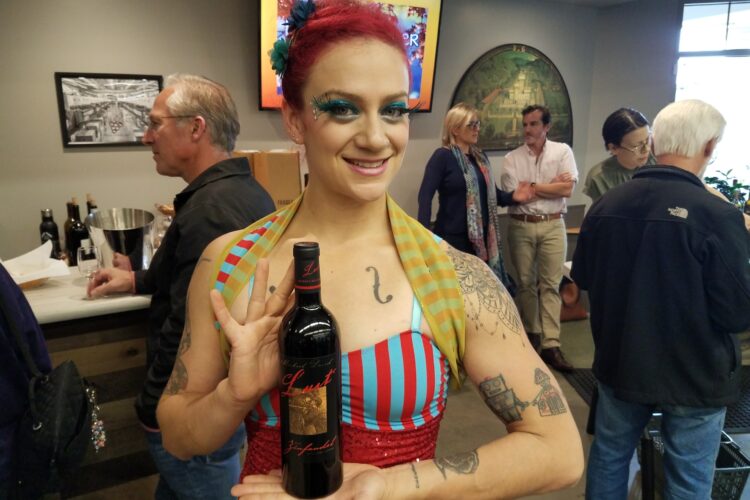 When the Phillips brothers – David and Michael – sold the popular Seven Deadly Zins brand to The Wine Group, no one really expected Michael David Winery (MDW) to rest on its laurels and untold millions. The brothers, who launched the winery in 1984 from an old hay barn in Lodi, are known for their brilliant marketing skills and exciting red wines. So what did they do? They bucked a trend and crafted a “flirty and fun-loving” Chardonnay –  the first white in their Freakshow “circus” line of three monster reds (Red Blend, Zinfandel, Cabernet Sauvignon).

With a label featuring Poseidon’s daughter “Madison”, the 2017 Freakshow Chardonnay debuted with a  production run of 15,000 cases that sold out on the West Coast. On Saturday, David Phillips unveiled Freakshow’s fourth wine act in Massachusetts while making a special visit to The Wine ConneXtion in North Andover.

“It’s been a huge hit,” said Phillips. “It’s a crowd-pleasing wine sticking to our style of making fruity, mouthwatering wines that are highly enjoyable and sell at a fair price.”

The 2018 Freakshow Chardonnay, which retails for $18, is selling for $12.99 while it lasts at Sam Messina’s WC store. It’s a flavorful mix of golden yellow apple and nectarine layered with just the right touch of butterscotch and vanilla coconut. The texture is mildly creamy yet the wine never loses its crispness. Phillips said the “soft mouthfeel” is achieved by fermenting 67 percent of the juice in stainless steel and the rest in oak. Only 50 percent of the total sees malolactic fermentation.

The 2018 vintage was ramped up to 50,000 cases – a 70 percent jump –  and who knows after that, said Phillips. Seven Deadly Zins launched with 700 cases in 2002. Sixteen years later it was America’s top-selling Zinfandel with 300,000 cases soldannually. “It was so successful … our five production facilities were extended to the limit. It became a monster to us all even if it was a good monster,” said Phillips.

A review of MDW wines offered at the Wine ConneXtion follows. The store’s special pricing is reflected.

Freakshow Cabernet Sauvignon 2016, $14.99 – The “strongman” on the label tips off the lift in this weighty, full-bodied red bursting with black cherry, raspberry, violent and chocolate notes. If you freak out over California cabs selling for $40 and more, here’s one to stock up on.

Freakshow Zinfandel 2017, $14.99 – Old vine Zinfandel is the key to this soft, pleasurable red featuring the Dazzling Fire Mistress on the label. A 15 percent alcohol level may seem incendiary, but all that blazes is a harmonious, fruity and spicy wine with refined tannins.

Petite Petit Red Blend 2017, $12.99 -Including the two plump elephants on the label, there’s nothing “petite” about this inky, dark berry-flavored Petite Sirah/Petit Verdot blend. It ages 19 months in French and neutral oak to form a rich, silky, plush texture. A favorite of mine for roasted lamb and turkey.

Inkblot Petit Verdot 2016, $26.99 – Ripe black fig, raspberry and pepper dominate this big, bold, midnight-colored red of intriguing complexity. Drink it now but two more years in the cellar will reward the patient consumer. Also in hand is the 2017 Inkblot Cabernet Franc ($26.99), a Bordeaux varietal packed with dense Lodi fruit on a lush frame.

Rage Zinfandel 2016, $45.99 – A highly concentrated Zinfandel of immense ripeness and character, there’s nothing to be angry about – just the opposite. Zin fans will flip over a multitude of raspberry, cranberry and cherry flavors mingling with hazelnut and pepper spices. Its companion Lust ($45.99) sold out at the tasting and is equally worth hunting down.

Rapture Cabernet Sauvignon 2016, $41.99 – MDW’s premium cab is intense, delicious and polished. It would likely sell for twice the price if the fruit was grown in Napa or Sonoma. As David Phillips would say, drink Lodi and lap up  its luxury in beautiful wines and bountiful savings.