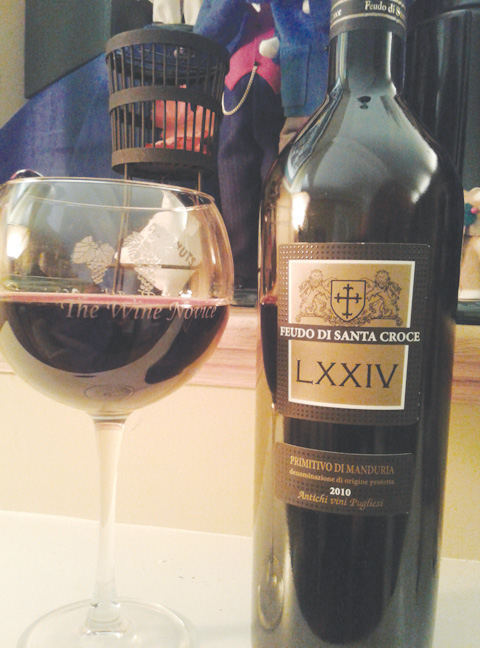 I’ve learned from experience that a wine must be pretty good when there is only one bottle of it left on a store shelf surrounded by stacked rows of other bottles.

So it was that the Feudo di Croce “LXXIV” Primitivo di Manduria caught my eye recently. The black bottle with gold lettering was hefty. It was produced in Apulia, the rich, agricultural stretch of land running from the top of Italy’s boot to the heel along the Adriatic Sea.

Two days later, the Wine Goddess, my wife Mary Lee, manufactured a fabulous meat lasagna out of thin air, topped with dollops of tangy tomato sauce, and accompanied by crusty Italian bread and a Greek salad. I opened the bottle and poured the inky, black-colored wine into a decanter and let it sit. In between, we took turns sniffing the aromas; barely detectable at first, they opened with black fruit, coffee, chocolate and wet earth. Thirty minutes later, we could no longer restrain ourselves as a sweet perfume filled the kitchen. We filled our plates, poured the wine into glasses, and — Mamma Mia! — it was like being transported back to the 15th century for a feast of the Medici.

Here are my first impressions posted in my wine diary: “Color is black as night with purple highlights around rim of glass. Looks jammy. Picking up dark berry fruit and cocoa or espresso (aromas). Beautiful mouthfeel. Smooth and elegant. Love the texture. Unctuous. Warm and satisfying. Flavorful in waves of dry blackberry and blueberry, with a deep chocolate mix. Hints of saltiness (sea spray?). Enduring, mouthwatering finish. Can’t put the glass down.”

The primitivo grape is the same as California’s fruity zinfandel. In Apulia, it is made into dry and sweet red wines. Primitivo di Manduria is a rare, dry red that is made only in the best vintages, leaving gaps in the years when it is produced. The Tinazzi family, with vineyards up north in the Veneto and in Apulia’s Salento peninsula, has made “LXXIV” Primitivo di Manduria as its flagship wine three times over the past six years — 2010, 2013, 2015.

The 2013 “LXXIV” attained Wine Spectator’s Top 100 list in 2015 at No. 67. That’s a remarkable achievement for any winery: two vintages, three years apart, selected among the magazine’s best wines in the world.

The 2010 and 2013 vintages are sold out according to online distributors. The 2015 was bottled in July of last year and awaits release under a new label name — “Imperio LXXIV” — no doubt with Tinazzi’s excellent track record, it will be worth seeking out, especially if the price remains under $25 a bottle. Sam Messina of The Wine ConneXtion in North Andover, where I found the 2010 standing alone awaiting my embrace, has assured me that he’ll be hunting down the new release.